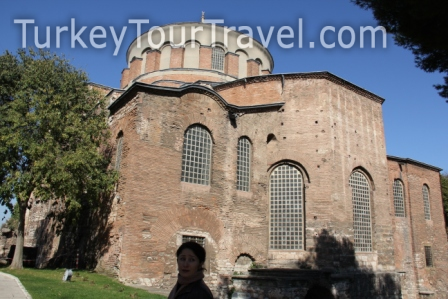 Day 1  - Arrive in Istanbul
Upon your arrival in Istanbul Ataturk Airport our representative will meet you and transfer you to our BONJOUR HOTEL. Overnight in Istanbul at Bonjour Hotel in Old City, Sultanahmet.

Spice Bazaar (Egyptian Bazaar):  built between 1597 and 1664, it is the second oldest covered bazaar in the city. You may find there mystical smells of different aromas of various spices. Shops selling fruits, vegetables, flowers, fish etc..

Rustem Pasha Mosque: Mimar Sinan built this mosque in 1560 for Rustem Pasha, son-in-law and the grand vizier of Suleyman the Magnificent. its particular beauty lies in iznik tiles covering it, both inside and outside.

Bosphorus Cruise: The Bosphorus strait connects the sea of Marmara to the Black Sea and separates Europe and Asia, making istanbul one of the most beautiful cities in the world and the only one built astride two continents; this romantic cruise along the Bosphorus will allow you to admire the Dolmabahce Plalace, the Beylerbeyi Palace, the Ciragan Palace and the Rumeli Fortress, ancient wooden villas and bridges and all the wonderful and unige maritime landscapes.

Bosphorus Bridge :  Drive on the bridge and enjoy the beautiful view when crossing the bridge from Europe to Asia.it is 1704m long and was the 4th longest in the world when completed.Unique chance to step from one continent (Europe) to another(Asia) in 2 minutes.

Lunch at the top of Camlica Hill

Camlica Hill: The highest point in istanbul, exposing a panoramic view of istanbul city and Bosphorus from the best point of view.

Ortakoy : is a cosmopolitan area, bordering waters of the Bosphorus with communites of Turks, Greeks, Armenians and Jews.The neighbourhood hosts many different religious. it is also a popular spot for locals and tourists a like with art galleries, night clubs, restaurants, sitting by the waterfront for drink tea and coffee.

Dolmabahce Palace : was the first European style palace built by Ottoman Sultans between 1843 and 1846.This is the last residence for Ottoman Sultans with 365 rooms and 22 saloons. Famous with the great collection of European antiquity, furniture and 4.5 tons chandelier. Ataturk lived the final part of his life in the residental part of the palace and died there.

17:00 - Tour finishes and return back to hotel.  Overnight in Bonjour Hotel

Hagia Sophia : The Church of Holy Wisdom, undoubtedly one of the greatest architectural creations in the world used as a mosque during Ottomans and serving as a museum today.

Byzantine Hippodrome : The center for entertainment, amusement and sports in the city during the Roman and Byzantine Empires. The Egyptian Obelisk , the Serpentine Coloumn and the German fountain of Willhelm II are visited.

Blue Mosque : The Sultan Ahmed Mosque ,one of the most respected masterpieces of the Islamic world. Famous with its blue ceramic tiles which gives the mosque the well known name;"Blue Mosque" with its six minarets.

Lunch at the Special Turkish Restaurant

Topkapi Palace : The former Imperial residence of Ottoman Sultans , one of the oldest and the largest remaining palaces in the world. Today it is used as a museum to exhibit works of Art and many priceless artifacts.

Grand Bazaar (Kapali Carsi): The oldest and the largest covered market place in the world with more than 3000 shops with its rich collection of handmade carpets, jewellery, leather and souvenirs.

Day 4 - Transfer to airport
Breakfast Included
Please check out from hotel before noon. Our driver will transfer you from our Hotel to Istanbul Ataturk Airport 3 hours prior to your flight. End of your tour and services.